Marshall is just a small speck of a town outside of better-known Cities of Kalamazoo and Jackson Michigan. Marshall is a city built up by the elite and wealthy, but also full of a daunting history. This should be on everyone’s Halloween drive-by and ghost tour lists in the fall! 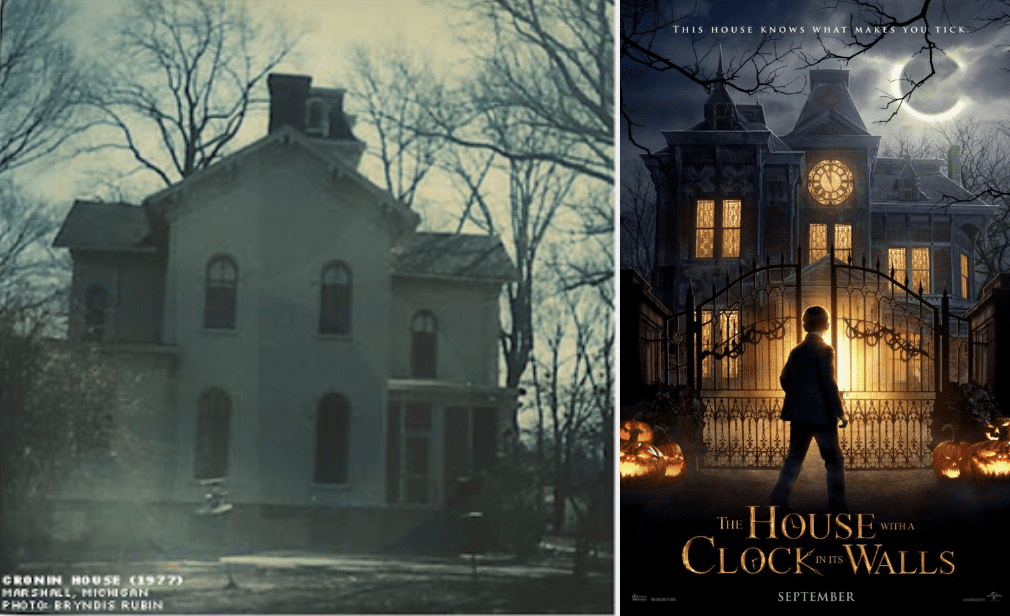 THE HOUSE THAT INSPIRED THE NOVEL AND MOVIE

Over a century ago a gorgeous Italian designed house was erected for the Cronin family in 1872 in Marshall, Michigan. In today’s times it has become the centerpiece for a novel, a Disney picture, and a community inspired by a haunting. Last year, as the house was being renovated, Jack Black and Cate Blanchett were filming The House with a Clock in the Walls, which is an awesome teenage mystery novel written by Marshall native John Bellairs who was inspired by this house.

Antiquities believed to belong to the Cronin family and from this home, including several skeleton keys that go to an armoire and lock several rooms, were purchased for Awaken Haunted Attraction in Leslie, Michigan and can be seen in the first room of the attraction. A local Leslie resident approached the owners of Awaken after an estate sale wondering if they might be useful to a haunted attraction. They go great inside the dark, dusty, and abandoned hotel lobby!

THE SISTERS AND THE HAUNTING

So the last living Cronin relatives were these two sisters who lived there until Elizabeth died in 1989 and Virginia in 2002, according to the Marshall Historical Society they did not get along. Before they died, they would let school children come in and do field trip tours, but would never allow access to the basement or the coal areas and appeared to have strange behavior and anxiety whenever they were asked about it. Makes you wonder if they were hiding something? The new owners are rumored around town to say that upon
renovation several things happened, which lead the contractors to believe the home haunted. Here you can see lights on at night, and the spiral staircase often will have the silhouettes of two women standing at the top in an ominous stance.

The clock! The story goes that the famous clock beloved by the sisters was found by a friend at the dump. It had their name on it “Cronin” so they brought it back as a gift. The family had someone fix it in 1900; it cost two dollars to fix. It is a beautiful clock and the sisters loved it very much. Though it didn’t live in the walls, except in the children’s story and in the movie. There are more super haunted locations in Marshal as well. You can do a ghost tour, or a carriage ride to check them out and see them for yourself.

The Stagecoach Inn was the gentlemen-only bordello and hotel. The ghost that wanders here is of one of the women of the night. She was tipsy one night and fell off of a balcony. As you can see the railing is low, and that would be easy to do when you’re all boozy. They are still open for business, but are now serving food and offer a classy joint to go get a bite, and maybe a scare too. Employees report doors open on their own, photos get flipped over to face walls, and cupboards open on their own. Some guests even say they feel a tug around their waistline during their meal or when visiting the restrooms.

The Block Building housed the opera house of the town upstairs. All of the theater set up is still up there, with the posters of the last opera performed hanging on the walls showcasing the leading man. People still hear him practicing his lines and acting out his scenes in the shadows.

Another location reputedly haunted is the Filligree Supply, on Michigan Ave. An accountant who had an office inside would come in every morning to find the tape in calculator run out with a bunch of random numbers on it. The computers liked to shut down on their own, and cold spot areas could be felt where a spirit may be drawing heat from in order to manifest, even in the dead of summer with no air
conditioning in the building.

So whether you are in the Halloween ghost hunting mood this season and want to explore some local spots in Marshall, or go see some of the artifacts and go through a killer haunted attraction, the night is yours and the spooky fun is endless.

Be sure to check out Dark Horse and Grand River Breweries while you are in the area!

This entry was posted in General, Haunted Houses. Bookmark the permalink.